Toot toot! I’m back! I’d like to say it was a peaceful break, full of delightful trips down Creative Writing Lane – but it was void of any ‘productive’ work, barring labour and delivery.  No, not a baby! A TV show.

Outside of writing for children, I work in the film industry as a costume maker for film and television. Clothing the lithe and famous — that’s one of my games, yo! Have been doing so for nineteen years now. I just finished a contract on an HBO show called Lewis and Clark, starring Casey Affleck, which was shooting in Calgary, Alberta. (Sadly I’m not allowed to post photos of what we work on until it airs! And if you want gossip on the stars, you’re gonna have to befriend me and gain my trust somehow. LOL! There are some CRAZY stories to tell….)

Calgary was an unexpected journey but not an unwelcome one, in the end. I was getting over a relationship that ended rather sadly, and unable to concentrate on writing Book 2 of The Stowaways. So what better time to experience a completely new place? I took the contract and just went with it, even though I had been planning on writing the whole year. When the words don’t come… what can you do? Do something else.

I am happy to report that after the first six weeks of misery in Calgary, grumbling and moping over not writing (I am a certified Master of Resistance), Alberta won me over! What a positive, sunny place to heal your broken heart. I spent loads of time with bubbly Nicole McInnes, of OhDina fame, who was milliner on the show and also became a close friend  (Need a flower crown? Yeah, we all do sometimes. She’s your gal). Because of time with her, I rediscovered my fun side and came back to Halifax  feeling able to steer life again.

Sometimes you have to give yourself time to rehabilitate and strengthen before you can emerge from under a Rock of Pain. And sometimes you need someone to kick you in the, er… “posterior” and tell you to enjoy your darn self for once! Nicole was just that person.

Here’s a sample of the giggles we had at the Gopher Hole Museum in Torrington, Alberta. Yeah, that’s right. Stuffed gophers. It’s not for everyone but if you leave without a smile on your face, I’ll be surprised! 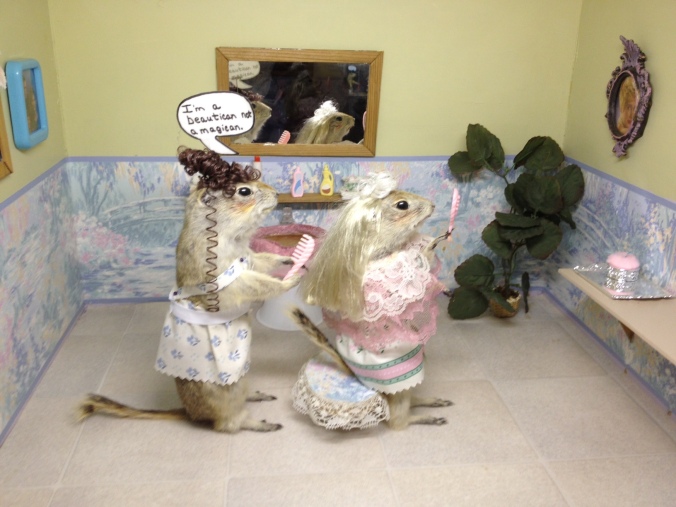 Yeah, it’s for real. Life is full of unexpected side-swipes, and though we may crash and burn for a bit, there is always the rest of today to turn it around. And there is always a Gopher Hole Museum to remind you that you won’t be sad forever.  You’ve laughed before, and you will laugh again!